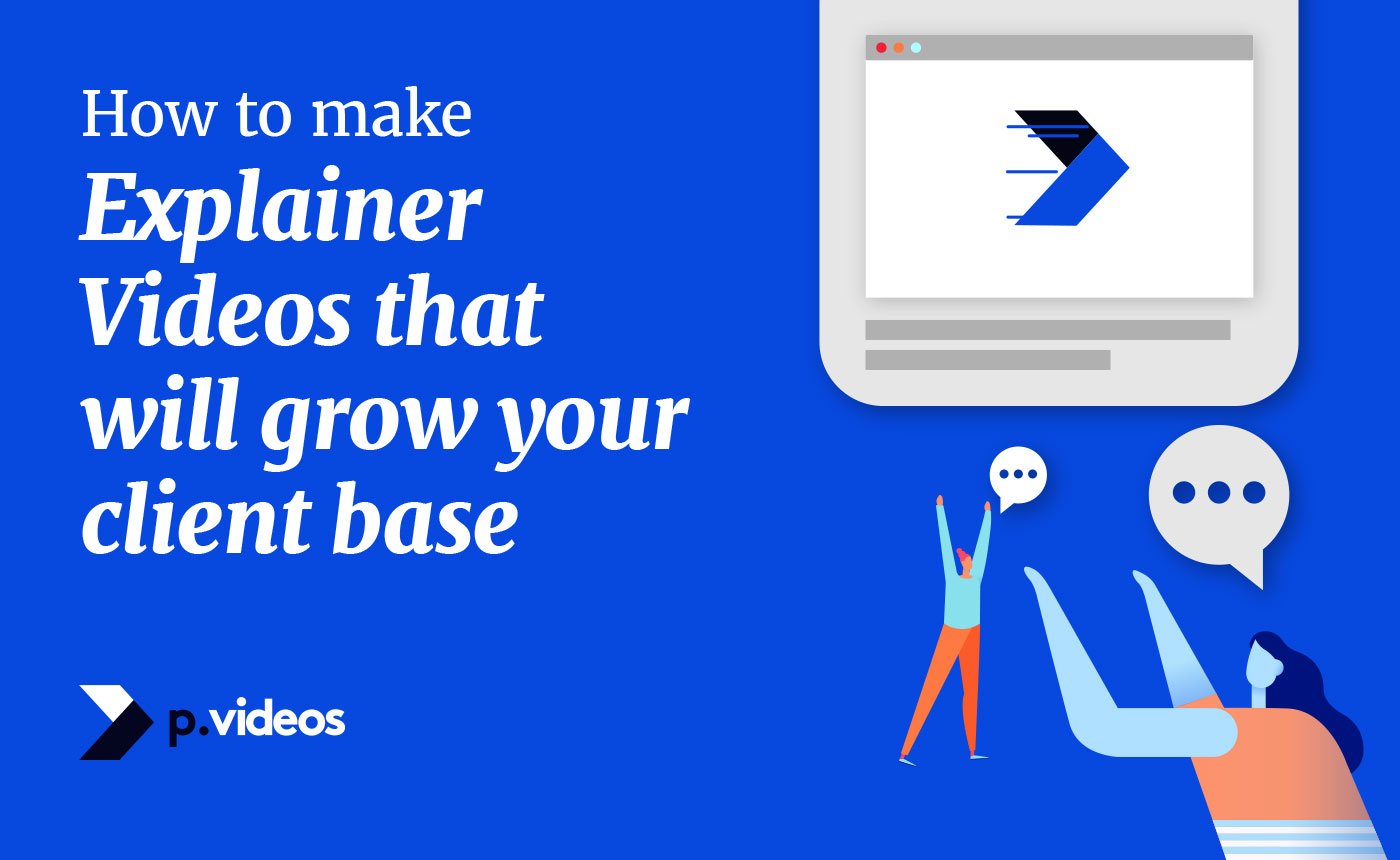 Make explainer videos that grow your client base

Having trouble reaching out to your audience? Do you need a means of helping the market understand your products or services?

Why not try explainer videos?

They’re all over the place nowadays. It’s almost impossible to scroll down Facebook without seeing at least one explainer video. Videos comprise the majority of Internet use these days – people watch videos more than they do anything else online.

Of course, simply throwing out an explainer video with no effort won’t get you anywhere. People will bounce out if the video doesn’t connect with them.

The best explainer videos follow a few simple but effective guidelines. These standards ensure that the videos convey the right message to the intended audience.

Not sure how it all works? In need of help to make your own explainer video?

Read on below to learn how to make interesting videos that can captivate, educate, and convert viewers in no time:

It’s all in the script

First off, keep in mind that it all begins with your script. You can’t hire a voice actor, work on animations, and edit a video without a solid script. It’s the foundation your explainer video stands upon.

Everything else will fall into place once you finish your script. The way your voice actor reads the lines and how the animator crafts the visuals rely on the tone you set.

1. Know your audience, find your tone

But what kind of tone do you go for?

It all depends on your audience. Do you aim to release this explainer video for professional investors or do you want to market your product to stay-at-home freelancers? Are you marketing towards casual consumers or the hardcore tech-savvy who inspect every aspect of your products?

That said, make sure to keep a professional tone even if your video gears towards a casual audience. Don’t use street slang or derogatory terms.

Make it a habit to go back and edit the script after a few days.

Edit words you think don’t think cater to your audience. Perhaps a phrase is too complex or filled with jargon people might not understand. Perhaps it’s the other way around; your audience understands the complex things and your script is too simple so take time to spruce it up.

Don’t make a long video. Short videos are the key to success here.

It’s not only about keeping your audience engaged and dealing with short attention spans. You also have to remember there are millions of other videos out there. If your video is too long, viewers might feel too lazy or uninterested to engage and will instead pick a similar video from someone else because it’s shorter.

How short should your videos be?

At the minimum, stick with 30 seconds. That’s the standard most TV commercials standby. At the moment, stretch to eight minutes.

Hitting ten minutes is already too much. Look at some of the most popular YouTube videos – very few go over ten or fifteen minutes. If they have to go over that limit, content uploaders split their video into shorter chunks that are easier to digest.

Don’t make your explainer video a moving infographic. That’s boring and a waste of time. People can get the same information in a single photo and believe it when people say there are amazing infographics out there.

Your video should go above and beyond that.

If you want to use videos to increase conversion rates and advertise your wares, don’t simply focus on the numbers. Use the video to tell a story. This helps relate the numbers to the audience because stories put the facts into context.

Form a narrative. Showcase a problem and then present your product or service as a viable answer but do it using a story. You can even present previous clients to showcase these stories in the video are real, solidifying the reputation and reliability of your company.

Yes, you have to tell your message and get it across in a short amount of time. However, you shouldn’t force the animators and the voice actor to move at the speed of light. Place break marks in the script, ensuring they can pace themselves properly.

That’s a little too fast for an explainer video. You need to give the voice actor time to breathe and enunciate the words. You also need to give time to let the animation do its job.

This is why some videos, which could end in a minute or two, stretch to twice their length. They set a steady, relaxed pace while still getting their message out in a short and concise period.

Speaking of concise, that’s the next important tip.

Since you don’t have a lot of time, don’t waste precious seconds with fluff. The best explainer videos put their message in the first half-minute of the video. Everything that follows, like your narrative or showcase of benefits, build upon that initial message.

Yes, you should tell the main message within the starting 30 seconds.

Microsoft gives a great example with their video for their Cloud service. They present a problem and solutions, including an introduction to their service, in 30 seconds. They then use the back half of the video to list down the benefits of their service and how it stands out from other, similar services in the market.

Don’t know how to tell fluff from useful information?

One good way is to write your script in one go. Don’t pause to edit and fix things. Simply write it until you’re done.

Your next step is to go back to the beginning and read the script out loud. Does each sentence build on the next one? If you read a sentence and realize the paragraph is the same without it, go ahead and delete it.

Keep doing this until you’ve deleted all the unnecessary lines. Does your script still tell the same story? If it does, you’ve got a tighter, more concise script to work with.

6. Focus on the benefits, not the features

That said, don’t list down features of your service or product. If you sell smartphones, for example, don’t simply list that this phone has a 25 MP camera and another can take stereoscopic 3D images. Those are plain-looking data and this is boring.

Instead, re-word these features to make them sound like benefits. Take the example above. Go with “this phone’s 25 MP camera guarantees high-quality photos so you never miss a moment during your vacation!”

Listing benefits instead of boring features create a demand for what you offer. Sure, they might already have a phone with a high-quality camera but now they want yours because your video made it sound better. You made them think that their phone and camera aren’t doing them justice and they’ll demand something better, something you have!

7. Professional with a touch of humour

Always keep in mind that people watch videos for entertainment, even when they’re looking for explanations. Educational videos shouldn’t automatically be boring. Add in a touch of humour and keep your audience engaged with the message or visuals.

That said, make sure you keep a professional tone. You don’t want to resort to insulting jokes or awkward silences. Instead, keep your writing in line with the kind of audience you want to reach out to.

Even with the most professional audiences, however, you can still add a few nice touches to lighten the mood. You don’t even need to put humour in the script – you can add cues for the animators to put in a visual gag that plays on the spoken narration.

Humour is also important to make your explainer video viral. People are more likely to share the video if they found it enjoyable and funny. Not only will they give their peers a chance to learn something but they might get a kick out of the funny bits too.

Your script is the priority. Good design alone won’t win people over but it is an important start.

The message you put out, whether in a voice-over or musical, is the pillar of the video. The visuals only play second-fiddle to the message. That said, they are a very important element of the explainer video.

Even the simplest visuals can get the job done if they complement what you’re telling the audience. They have to be pleasing to look at and in this case, simple lines and basic art are the best. You don’t want to overload the audience’s senses with too many visual cues and colours.

Distracting them with wild visuals takes away their attention. You don’t have to use every bit of visual flair that your explainer video software can offer. Scale down and use only what you need to tell your story.

They won’t listen to your message that much anymore. The motion graphics should boost the video’s efficiency instead of being the sole crutch it relies on. Don’t let the visuals take over the weight of the audio; instead, they should complement each other.

A majority of explainer videos like to use simple art. They don’t fill the screen with more than 3 or 4 colours, using the art only to amplify the message of the narrator.

Want to grab someone’s attention in the first ten seconds of your explainer video? Use catchy music!

Music is the universal language, so they say, and a good jingle will grab people’s attention even before your visuals or narration do. The music can set the tone, grab attention, and pique interest in the first five seconds.

Choosing the wrong kind of music can break the immersion too. You have to be extra careful because the song sets the precedent for the mood of the rest of the video.

Don’t know where to get music? Fortunately, there are a few catchy royalty-free songs available online. You can also hire jingle composers and even YouTube musicians to help you compose the right audio track for your video.

While working on the script and voice-over work, you can use a temporary song first. When it’s time to hire someone to compose the real track, let them hear the temporary one so they can get an idea of the mood and timing you want.

Last, but certainly not least, you need to hire a good voice actor.

You need someone who can,

Seasoned voice actors can identify lines that don’t suit their voice or how they speak. Lines that work on paper might not sound great when narrated out loud. You need to work hand-in-hand with your voice actor and ensure they help you produce the best, most effective explainer video possible.

Experienced voice actors or on-screen actors can be expensive.

That said, it’s better to hire one instead of asking an employee to do the narration. Experienced actors have the training that ensures they get the job done right and in a timely manner. In the long run, hiring a professional can save you time and money.

What are you waiting for? Using these tips, you can make some of the best explainer videos that are great for marketing and increasing conversions. You might make the next big viral hit, like the “Dumb Ways to Die” video!

Don’t know where to start? Are you in need of help to get your creative juices flowing?

We’re here to help! Feel free to contact us now and we’ll get you on the right track to make efficient and exciting videos.

Learn to knock investors off their feet with strategically placed visuals

The process for producing an effective explainer video