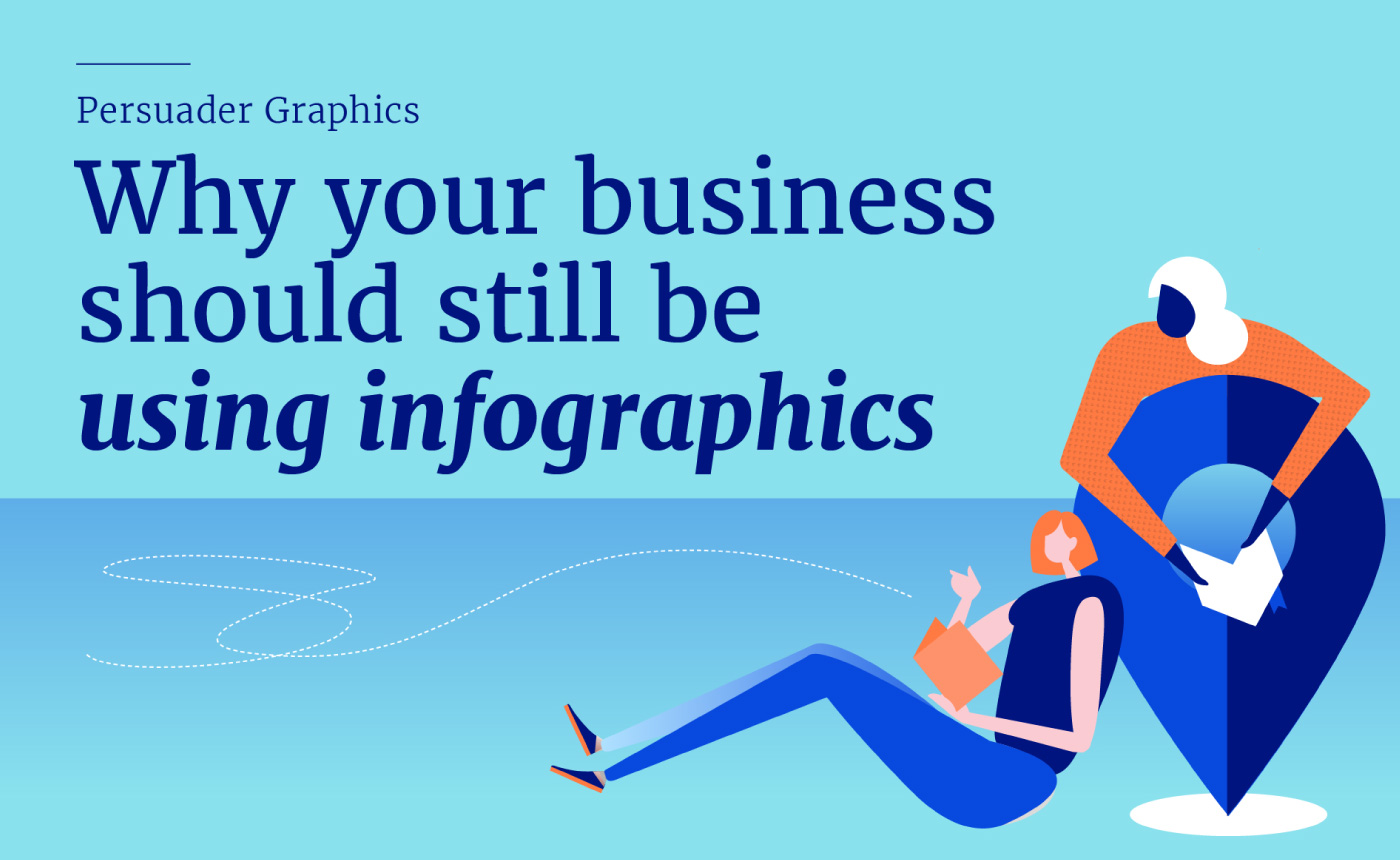 Why your business should still be using infographics

About a decade ago, infographics really started to take off. They marked a new generation marketing and communication tool for businesses desperate for new ways to cut through the noise and connect with their audiences.

And it’s not hard to understand why the concept spread like wildfire. While businesses were growing concerned about becoming drowned out in the digital revolution, a compelling case was being built for investing in infographics. Number crunchers all over the place were revealing exciting statistics like; the average user only reads 20-28% of the words on a webpage and, an infographic is 30 times more likely to be read than pure text.

But 10 years on, marketing departments are starting to wonder whether all good things really do come to an end. In other words, are infographics still as effective as they used to be? Well, the short answer is a big yes.

Sure, infographics gained tremendous popularity in recent years, but the basic concept isn’t quite as ground-breaking as most people think. While advancements in technology have no doubt contributed to their rapid uptake in recent years (whether that be to do with how they’re produced or consumed), there are a few fundamentals about the infographic that have kept them around for hundreds of years – literally.

Infographics can be reused and repurposed – almost anywhere

Unlike written content, which usually needs to be crafted with a specific platform and audience in mind, one single infographic can work effectively across all kinds of different channels and mediums. This also makes infographics incredibly cost-effective to produce too. For example, they can be used in eDMs, printed marketing materials, blogs, reports, presentations and social media postings.

What’s more, it’s not just about where people are finding the content, but how they’re consuming it too. With the proliferation of mobile, infographics are one of the easiest forms of content to absorb on those small screens.

In 2018, the human thumb has never done so much exercise. We’re talking about the infinite amount of scrolling people do during every spare moment, thanks to the vast amounts of content we have fed through our digital devices. So, it’s hardly surprising when we hear 55% of website visitors spend less than 15 seconds reading content on a page.

Infographics with engaging visuals are not only highly effective at piquing curiosity during that small window of opportunity, but they’re capable of communicating a worthwhile story in a very short amount of time. In fact, the human brain processes visuals 60,000 times faster than text.

When it comes to complex issues, there’s a time and a place for long-form content such as articles and detailed reports – like when people have time to invest! Most of the time, you just need to get those key concepts across in the fastest and most straightforward way. Presentations, pitches, or social media are great examples of where this might be the case.

Infographics can turn dull or complex subjects into engaging stories by presenting data and information in graphical form. This could include survey findings, trends, industry insights, studies, and many more.

With so much content on offer, consumers have become much more astute when it comes to assessing the credibility of what they’re reading. In fact, some argue that the hotly debated issue of “fake news” is currently presenting “an existential crisis for social media”.

So, it stands to reason that infographics, by their very nature, are only increasing in their relevance to modern audiences who have wised up to being misled. This is because they’re primarily a vehicle for hard facts and statistics which enable audiences to verify the story being told at first glance.

Articles that contain images are said to generate 94% more views on average than articles without. Which spells great news for the infographic! There are a few reasons why this is the case, but it mostly comes down to their manageability and appeal to a wider audience.

Infographics are easy to understand and digest for people who aren’t experts in the subject matter, people who don’t enjoy reading, and those who are really stuck for time. And that means they’re far more likely to get shared around.

While infographics are light on text, they’re also rich with facts, data and statistics. So, they bring a huge opportunity to incorporate valuable keywords and backlinks to your website and other useful webpages.

And don’t forget, image names can also be tailored for SEO. Indeed, there’s every chance an SEO-smart infographic could be returned in a Google search year after year.

They build your brand

And here’s the proof. How many times have you remembered telling a great joke, which you knew was so good because you remember people laughing, but you can’t remember the actual joke?!

The moral of this story – infographics which carefully and consistently use visuals, colours, and typeface will be easily recognisable and associated with your brand, while the all-important information within has a much greater chance of being remembered.

The four stages of creating a successful conference presentation

Prezi: When to use it and when PowerPoint is a better option